After launch and as part of the ongoing operations, instrument validation is an important bridge between the science and instrument operations. The goal of the OCO-2 Validation effort is to tie the satellite data from OCO-2 to surface based measurements of carbon dioxide made by National Oceanic and Atmospheric Agency (NOAA) and the World Meteorological Organization (WMO). Having measurements that have been validated and documented is a way of providing confidence to data users that the satellite has been evaluated against independent data sets. 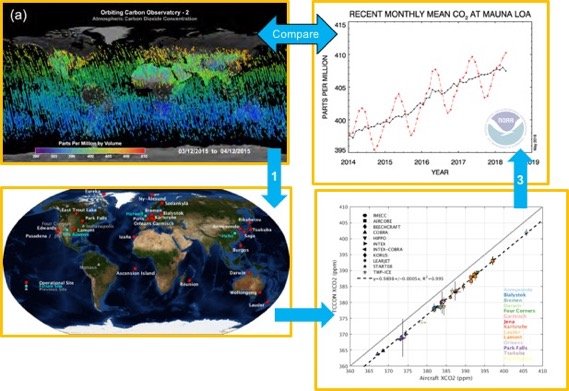 In order to successfully link the OCO-2 measurement to the surface observations of CO2, the OCO-2 team works in a step-wise fashion comparing observations to get to the WMO standard.

The first step is to compare the OCO-2 measurements of total column dry-air mole fractions of CO2 (XCO2) to the very precise XCO2 measurements from the ground-based Total Carbon Column Observing Network (TCCON). This is where most of the validation effort is concentrated: the comparisons to TCCON allow us to “validate” our data.

The second step involves comparing the TCCON data to independent observations made by aircraft and balloon-borne instruments during various campaigns.

The final step of the process is done by comparing the data to aircraft and balloons because those measurements can be directly tied to the WMO standard. Most of the effort on OCO-2 validation involves step 1: comparison to the ground based TCCON data. The team also supports efforts for getting data for step 2 at the TCCON sites.

What is TCCON? More information can be found at TCCON Web 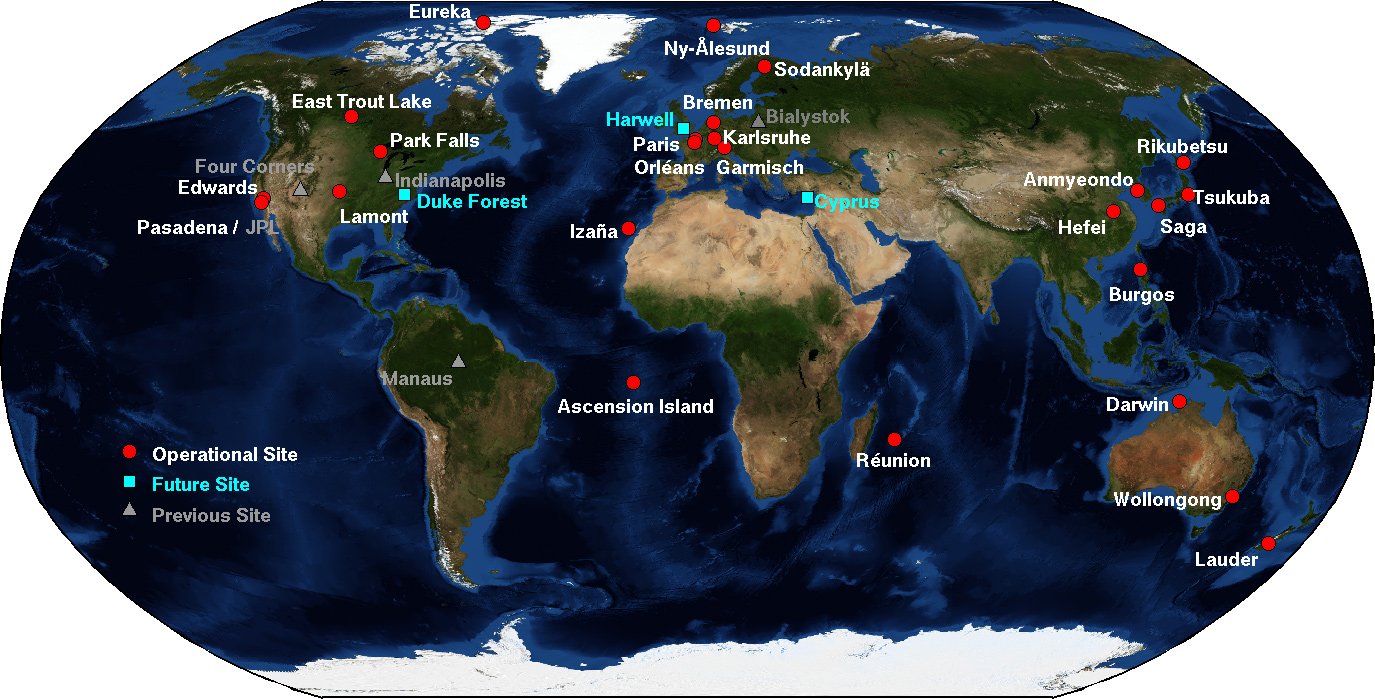 A map showing the TCCON Network

TCCON is a network of ground based Fourier Transform Spectrometers (FTS) measuring a variety of atmospheric gases, where this network of FTS instruments also measures XCO2 in the same wavelength bands as the OCO-2 instrument. To check out the TCCON Data, please visit: TCCON Data

More information on the TCCON instruments and the early sites in the network are available in Wunch et al., 2011 (PDF, 2.26 MB) 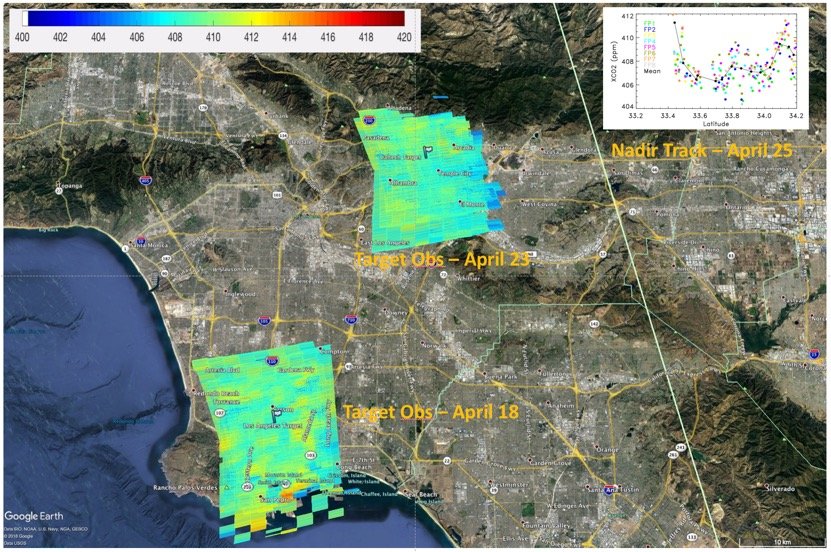 The Validation (of OCO-2 XCO2Data) Journey:

In fact, the core of the OCO-2 validation plan is based on obtaining TCCON data. The OCO-2 team works closely with the Principal Investigators (PI) of the respective TCCON stations and alerts them to possible target observations a week ahead of time. Then, the team alerts TCCON PIs about selected targets, 12-24 hours ahead of time. TCCON PIs keep their status updated on the TCCON wiki allowing that status to be factored into target decisions and to provide quick turnaround for TCCON data coincident with target observations. The OCO-2 project could not perform the necessary validation of its XCO2 data without the assistance from all the TCCON investigators and all the work they do to obtain and provide their excellent data set. 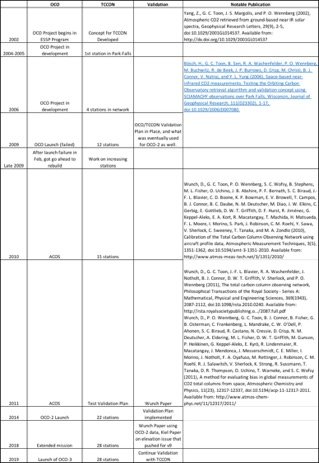 The Wunch et al., (2017) paper provides a comprehensive overview of the early efforts to validate the OCO-2 data. The results from that paper are summarized below. The effort will continue as long as OCO-2 is taking data. We continue to update our comparisons to the TCCON data and continue to learn new things from the work. Examples of more recent comparisons (January 2019) are shown in the figures below. 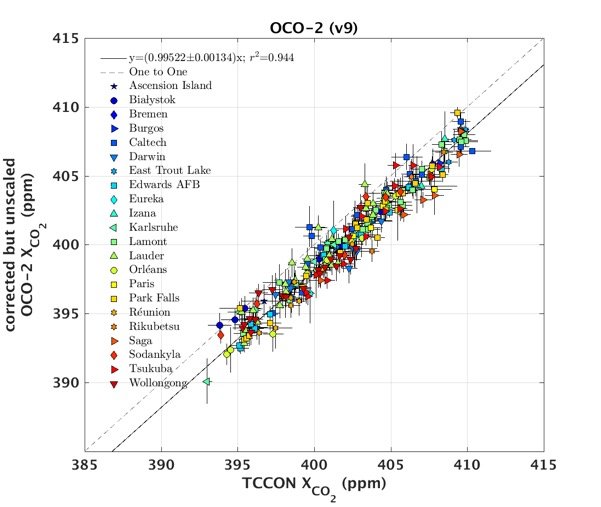 This figure shows a plot of the TCCON data (on the x-axis) versus the OCO-2 data (on the y-axis). The ideal case would be that both instruments would measure exactly the same value for a given time and location. When the measurements don’t exactly match, we learn about possible biases and uncertainties in the OCO-2 data. 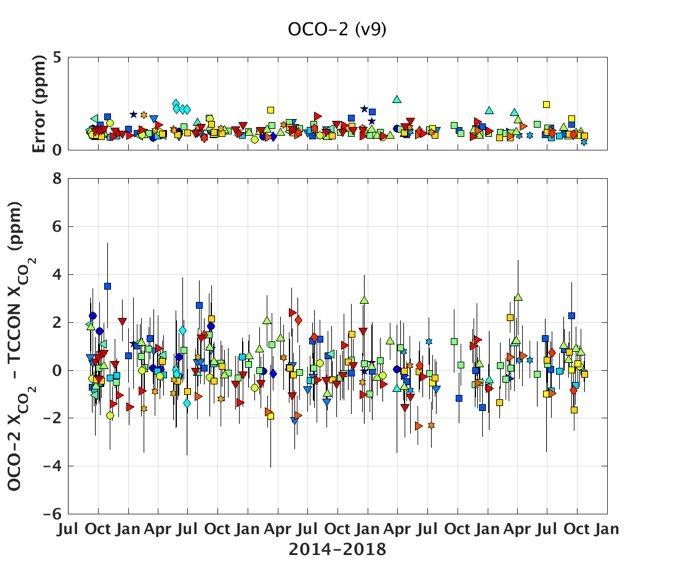 This figure shows a time series of the differences between the OCO-2 target data and TCCON observations. The different shapes/colors represent different TCCON sites, as listed in the previous figure.